Who Was Sarah Thorne?

Sarah Thorne(1836–1899) Actress, theatre manager of the Theatre Royal Margate, originator of the countries first Drama Schools, she is our inspiration and spiritual mentor. This is her story...

A member of a family connected extensively for several generations with the stage, Sarah Thorne was to become a talented and versatile actress and an able theatre manager. Her stage début was on 26 December 1848 in a pantomime put on by her father at the Pavilion Theatre, Whitechapel.

After further appearances there, as Little Pickles in The Spoiled Child and in E. G. Burton's blank-verse play The Warrior Boy, for which she practised broad-sword combat, she played in minor roles at the Surrey Theatre in the spring of 1854 under Richard Shepherd and William Creswick.

In the next years she performed in stock companies at Ryde, Sunderland, Newcastle upon Tyne, Sheffield, Hanley, and the Britannia Theatre, Hoxton.

She also joined her father for the summer seasons at Margate (which he had taken in 1855); playing opposite some of the leading actors of the day, she contributed to the growing status of that theatre. She first appeared there on 6 August 1855, shortly after Thorne's opening on 28 July.

In time, most of her seven brothers and three sisters also performed at Margate.

For three seasons in the late 1850s Sarah Thorne was the leading lady at the Theatre Royal, Dublin, where, inter alia, she played Desdemona to Charles Kean's Othello and Lady Macbeth opposite Gustavus Vaughan Brooke.

There followed starring tours in Ireland and Scotland. Some time between 1856 and 1859 she was married in Ireland to Thomas Macknight (1829–1899), already the author of an anonymous book attacking Disraeli, who later became editor of the Northern Whig. The couple had two children, Edmund (b. 1860) and Elizabeth (b. 1862), who married the actor–manager Henry Dundas (Arthur Harrison) in 1883. However, Sarah Thorne's commitment to the stage and Macknight's interests in politics and philosophy proved incompatible, and after only a short period they lived separately. In August 1863 she starred at Brighton and in 1865 she appeared, again in leading roles, including that of the eponymous Leah, at Paisley Theatre Royal, the Prince of Wales's Opera House, Edinburgh, and the New Theatre Royal, Jersey. Between October 1865 and March 1866 she played at the National Standard Theatre, Shoreditch, taking principal parts in a lengthy season of Shakespeare's plays.

Sarah Thorne's first experience of management came in 1867, when she succeeded her father as lessee of the Theatre Royal, Margate; she opened on 29 July with H. T. Craven's Meg's Diversions and The Child of the Regiment.

Her declared policy was to offer the 'newest pieces approved in the metropolis as occasion permits' but never to neglect 'old and legitimate productions' (Era, 4 Aug 1867). Her lease ended when the theatre was sold at auction in August 1873 to Robert Fort, and for the 1874 stock season she held a lesser management role. She returned briefly to Margate at Christmas 1874 during the tour of her now established annual pantomime.

Thorne's second period of management was at the recently rebuilt Theatre Royal, Worcester, where she opened on 27 March 1876. There she engaged touring productions and provided, as at Margate, a stock company with a repertory of both classical and contemporary drama. Her association with Worcester came to an abrupt end when the theatre burnt down on 24 November 1877.

She then formed a touring company to support the ageing Charles James Mathews.

The withdrawal of Fort's latest tenant enabled Thorne to resume a lease at Margate in January 1879. Committed to the rapidly disappearing stock-company system, she maintained an annual summer season. For the remainder of the year she opened the theatre to some of the burgeoning touring companies, among them that of her brother Tom Thorne (1841–1918), who brought productions he had first put on at the Vaudeville Theatre, London (where he was manager from 1870).

For a brief period in the autumn of 1879 she also leased Astley's Amphitheatre, London, where she appeared with her youngest brother, George Tyrrell Thorne (1856–1922), who had been apprenticed to her, in Boucicault's The Flying Scud. George was later a leading member of the D'Oyly Carte Opera Company.

Sarah Thorne gained a substantial reputation for training young players. In 1885 she opened her School of Acting, advertising for 'Ladies and Gentlemen' wishing to enter the theatrical profession and charging £20 for three months' or £30 for six months' training.

The regime, in which she was assisted on occasions by her sister Emily (Mrs Frank Parker Gillmore, d. 1907), included classes in 'voice production, gesture and mime, dialects and accents, make-up, the portrayal of characters, the value of pace and the value of pauses' (Morley, 110). Among her pupils were Harley Granville Barker, Helen Brinckman, Sarah Brooke, Louis Calvert, Gertrude Kingston, Beatrice Lamb, Evelyn Millard, her niece Nellie Thorne, Irene and Violet Vanbrugh, and Florence Ward. While it was customary for actor–managers to take apprentices, this school is regarded as the country's first formal drama school. In 1894 she leased the Chatham Lecture Hall, which she renamed the Opera House and used as a second venue for her stock company.

Although she was acclaimed in a wide range of parts and genres, Sarah Thorne's preferences were for Shakespeare's Beatrice, Desdemona, Juliet, and Lady Macbeth, Kate Hardcastle in She Stoops to Conquer, Lady Teazle in The School for Scandal, and Leah.

She insisted on good taste in her choice of plays and in their production, avowedly rejecting 'anything vulgar in costume or language' (Chatham, Rochester and Brompton Observer). She is said to have had a 'somewhat imperious manner' (Thanet Times, 3 March 1899), but a Margate contemporary spoke of her generosity, especially to the poor and elderly, whose rent she would sometimes pay herself (Chatham Observer).

Sarah Thorne's last performance was in September 1898, at her benefit at Margate, when she took the part of Parthenia in Maria Lovell's Ingomar. Her last appearance on the Chatham stage had been in May 1896, as Lady Gay Spanker in London Assurance.

She died at 3 New Road Avenue, Chatham, on 27 February 1899, just as what was to have been a celebration of her theatrical jubilee was being arranged by George Alexander and Gertrude Kingston for 16 March at St James's Theatre, London. She was buried at Brompton cemetery on 3 March 1899. After her death her son, who had been her business manager since the early 1880s, took over the leases of the Chatham and Margate theatres. 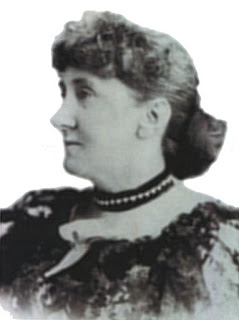 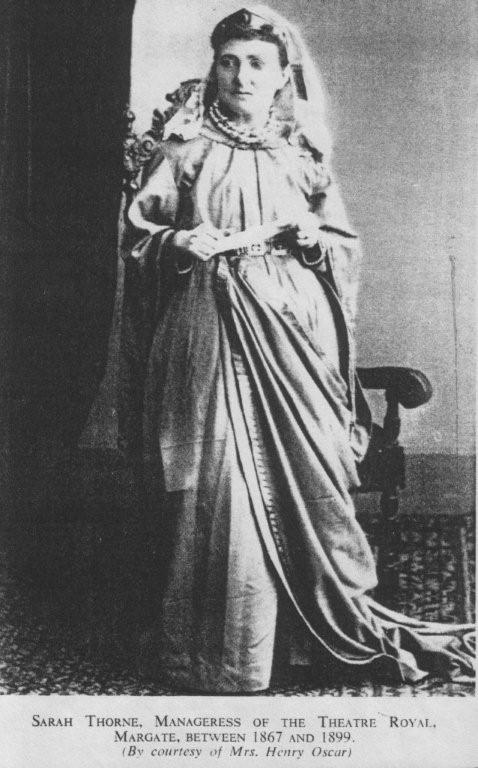 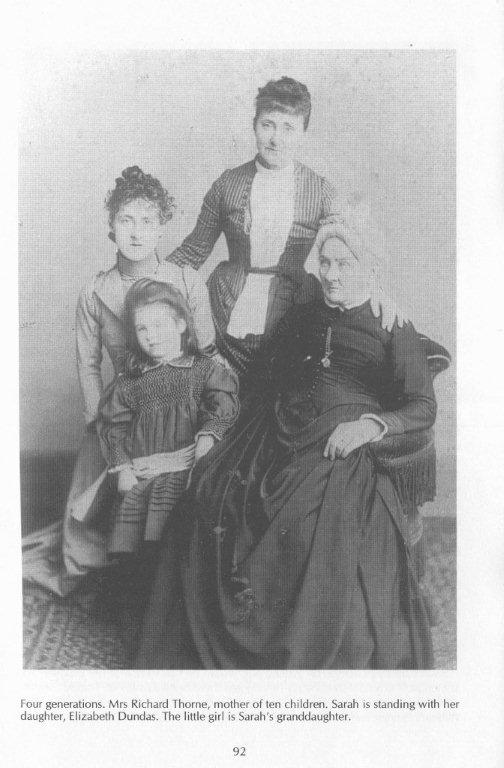